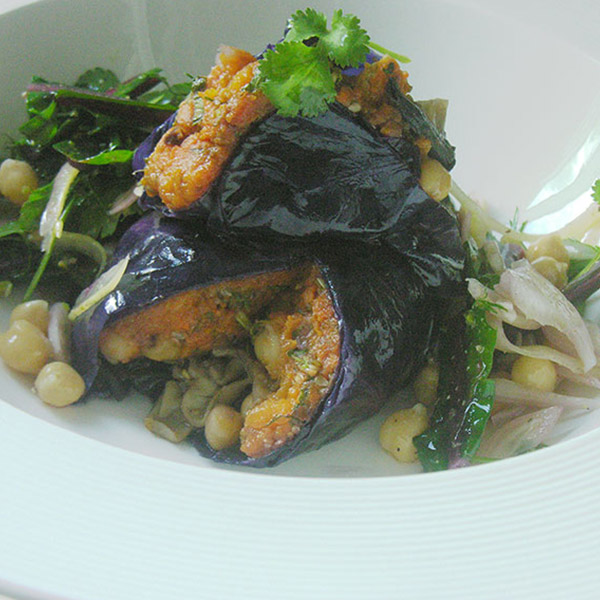 Pre heat oven to 200_C
Brush the sweet potatoes with ghee and put them in a baking dish. Add the water and bake until cooked. Allow to cool until you can handle them and then remove the peel. Saut the Swiss brown mushrooms in the remaining ghee and they are lightly coloured, season lightly with salt and pepper, then stir through the trompetta and then turn off the heat and allow to cool.

Core the cabbage and carefully pull away leaves unto you have enough to line four moulds 200-250ml capacity. Cut a _vÍ in the leaves and remove the thick central vein. Put a pot of water onto the stove and add a splash of olive oil and the cooking salt and bring it to the boil. Put the ice in a bowl and cover with cold water. Drop the cabbage leaves into the boiling water and cook them long enough to make them pliable but not mushie. Draining them as much as possible, carefully lift them from the boiling water into the ice bath and push them under. Drop the chicory into the water and cook just long enough to remove the rawness. Remove from the water and drop into the ice bath. When they are completely cold, drain them and dry the cabbage leaves on paper towel and drain the chicory in a colander or coarse sieve. Brush the moulds with olive oil and leaving plenty of overlap line the moulds with cabbage leaves.

Lightly mash the peeled sweet potato, season it with salt and pepper and add the coriander roots, chopped dill and parsley, dukka and lemon rind and mix together. Divide into four and press a quarter into the bottom of the prepared moulds. Drain the chickpeas and divide roughly into two halves. Divide one half between the moulds, then divide the mushroom between the moulds. Take a piece of plastic and press the mushroom and chickpeas into the sweet potato, then fold back the cabbage, pressing it firmly onto the mushroom. Wrap each mould tightly in plastic food wrap and refrigerate until ready to serve.

To finish the dish
Set up a steamer and steam the moulds for 25 minutes. Turn the heat off and allow them to sit for another 10 minutes to firm up.
In a bowl mix together, the remaining chickpeas, chicory, coriander leaves, plucked dill and parsley, pickled lemon and shallot. Season lightly with salt and pepper and gently mix together.

Unwrap the moulds and carefully invert them into the centres of four plates. Divide the salad component around the moulds and serve. If you want to expose the centre of the mould, cut out a quarter with a very sharp knife.

We like the smaller sweet potatoes but they are sometimes hard to find. If you can only buy large ones split them in half or quarters lengthwise depending on how big they are. Cooking time depends and the size, usually about 30 minutes for medium sweet potatoes or large ones cut to that size.
Just in case you might wonder about using truffles in what is basically a Middle Eastern dish, white truffles are common in Iraq and some other parts of the Middle East and have been part of the nomadic Bedouin cuisine for hundreds of years.